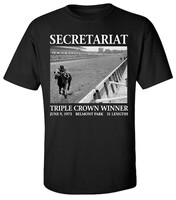 The official 31 length Triple Crown T-shirt features the dramatic image, which is universally considered the most recognizable racing shot of the champion and his Hall of Fame jockey Ron Turcotte, as they near the wire to complete their unforgettable record-breaking Triple Crown sweep. As an added bonus, on the back of the shirt you will find the most familiar part of announcer Chic Anderson's legendary call of the race when he states, "SECRETARIAT IS WIDENING NOW...HE IS MOVING LIKE A TREMENDOUS MACHINE!"

Save this product for later
Display prices in: USD